The Kid Gets Out of the Picture by LADG

“The Kid Gets out of the Picture” is of a contemporary English picturesque garden set inside the interior courtyard of Materials & Applications in the Silver Lake neighborhood of Los Angeles. Exploring William Gilpin’s picturesque travel sketches from the late eighteenth century, the LADG appropriated the organizational logic of his drawings, which frequently depict dense, heterogeneous collections of rocks and plants. These “clumps” consolidate together as a single entity regardless of the diversity of their constituent parts, creating a material landscape that is both continuously variable and continuously navigable.

The installation was in collaboration with Materials & Applications, First Office, Hirsuta, and Laurel Broughton / Andrew Kovacs. The project was made possible in part by the generous support of the Graham Foundation.

The vocabulary of early 19th century picturesque landscape architecture is almost entirely alien to contemporary ears: clumps, lumps, masses, groups, belts, hollows – these are a few of a vast catalog of objects that once belonged to design but are now simply common words with a slight ring of anachronism but no special disciplinary association. While the meaning of the terms requires historical recovery, the project around which these words were organized is entirely familiar. In the simplest terms, the picturesque was intent on reforming the real material of landscape and buildings to become more picture-like. 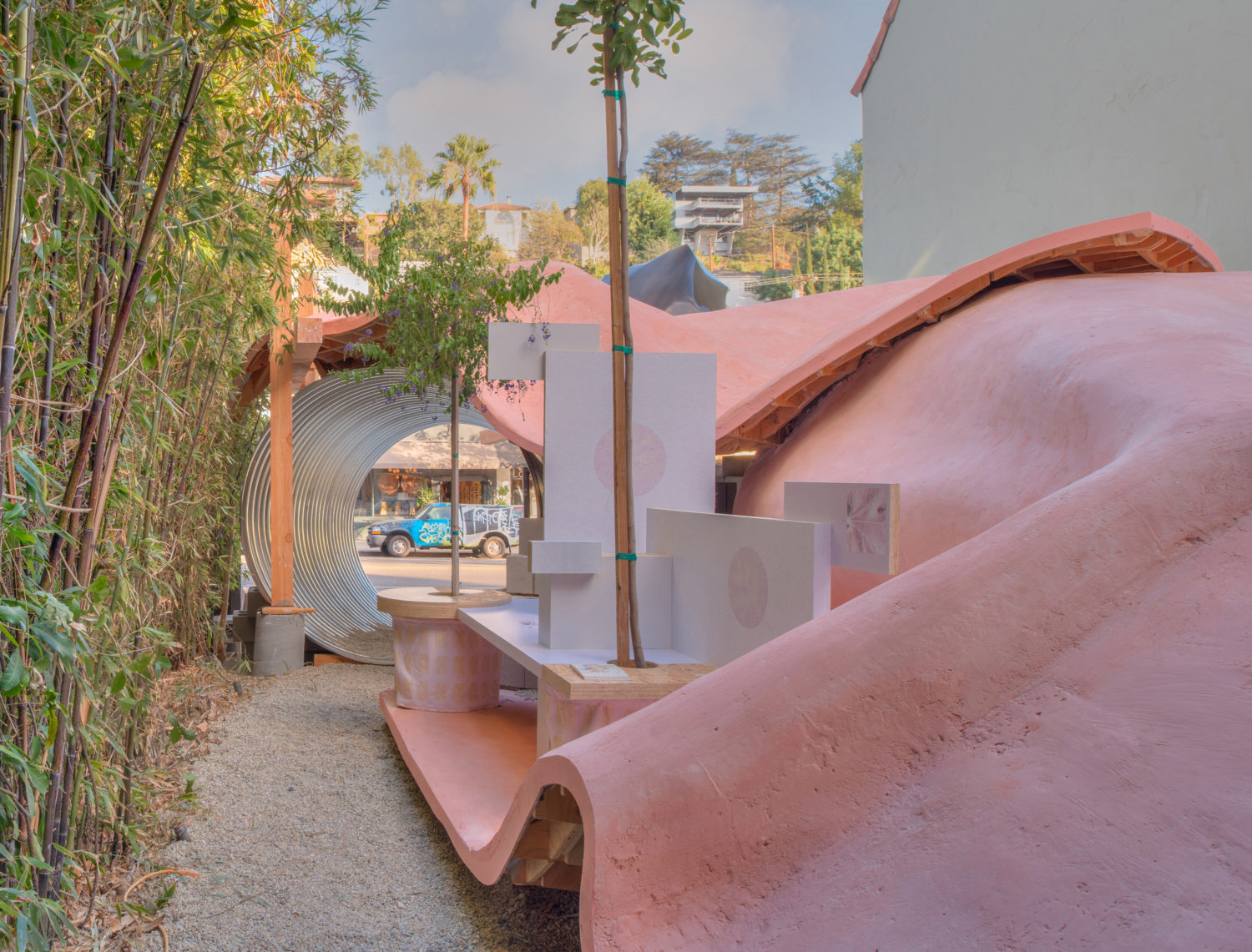 The ambition to make the world more picture-like, for all its intuitive simplicity, was of course a complex operation that required the invention of news ways to plan and design, and as well new ways to theorize the relationship between design and its audience. As an act of design, the picturesque used objects and techniques that would bring real material closer into line with the medium specificities of painting and drawing. Clumps, groups, and masses, for instance, can all be read as ways of clustering together trees and land masses so that they are more readily analogous to the way paint is applied to canvas. Design’s audience, too, was engaged through traditionally pictorial devices. Scripted paths and viewpoints that would separate scenes into foregrounds, middle grounds, and backgrounds like the depth of a picture plane. New discourses of visual consumption were developed to rationalize and describe the “tastes” of scenes with a high degree of precision.

“The Kid Gets out of the Picture” – with a nod toward Hollywood’s desire to stay into the picture – returns to the picturesque’s catalog of nouns with a different goal in mind. Is it possible to return to the moment when the picture became the instrument for the reformation of design and its discourses, and emerge with something different? The purpose is not so much to the defy the image, or bemoan image culture – we take those as immutable and here to stay. The purpose is instead to simply work for a while in the opposite direction. If the real is has been used for its value inside the picture, perhaps elements of the picture can find their way out into space. Setting aside for a moment their picture-producing capacity, what spaces, organizations, and forms of life are possible in the nouns of the picturesque? 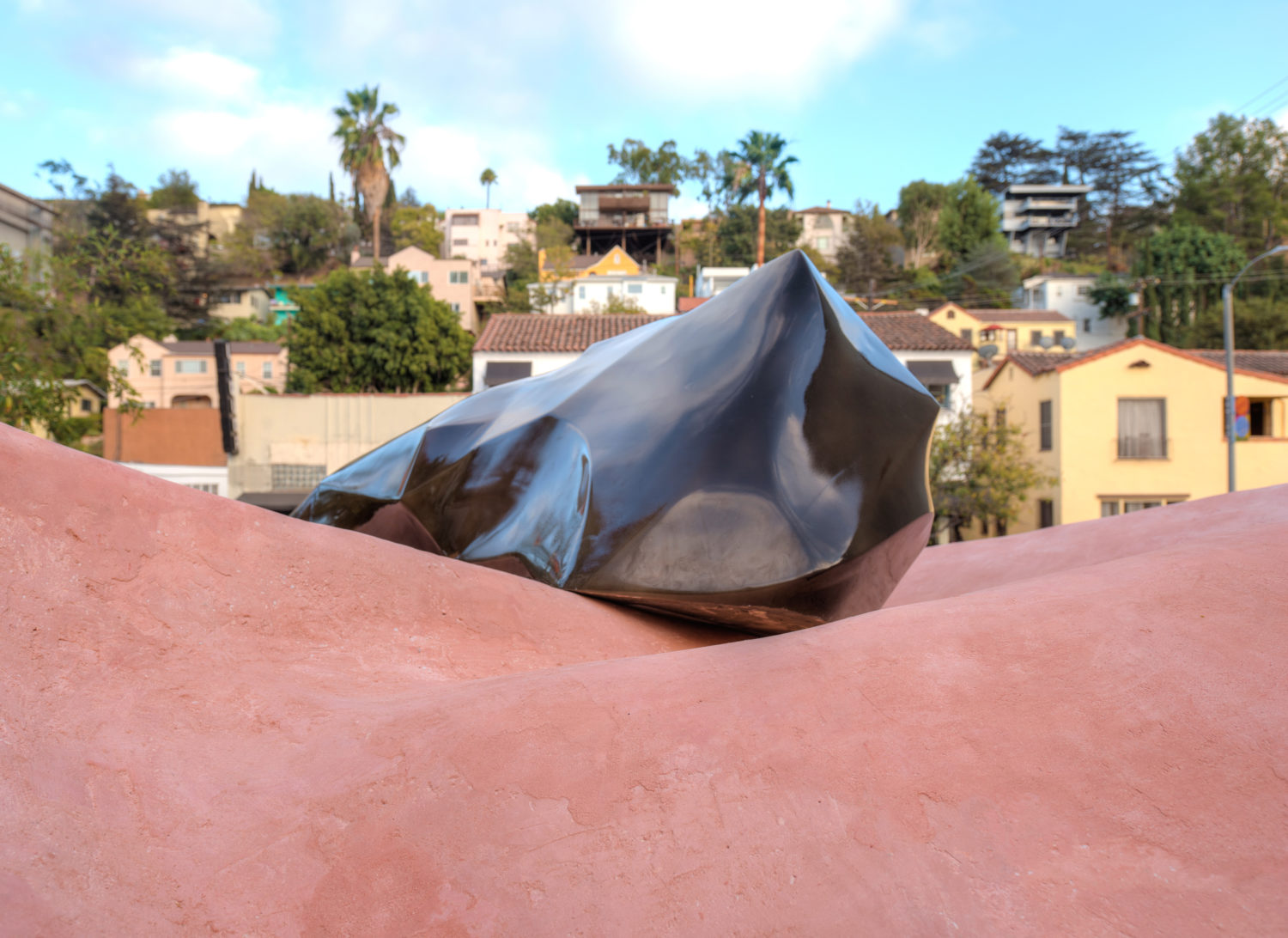 Of all possible picturesque nouns, we take clumps as our point of departure. In Gilpin’s drawings they are dense, heterogeneous assemblies of trees, rocks, bushes, sometimes even sheep and clouds. To navigate the drawings as real objects would mean walking through a field of things freely distributed in section. Being under, on top of, or alongside, would happen all at the same time in an overflowing of prepositional relationships. “Things” here are important. Clumps are not just agglomerations of some primordial base material, but agglomerations identifiable, known things packed together in close association.  Remarkably, despite all of the possible affiliations with categories of objects in contemporary art and architecture (the assembly of heterogeneous parts, the emphasis on known “things,” the a-formal or formless appearance) clumps resist categorization. Clumps are not collages. Clumps are not intricate assemblies of continuously differentiated parts. Clumps are not difficult wholes. Clumps are not classical unities. Clumps are not socially didactic, teach-able moments. 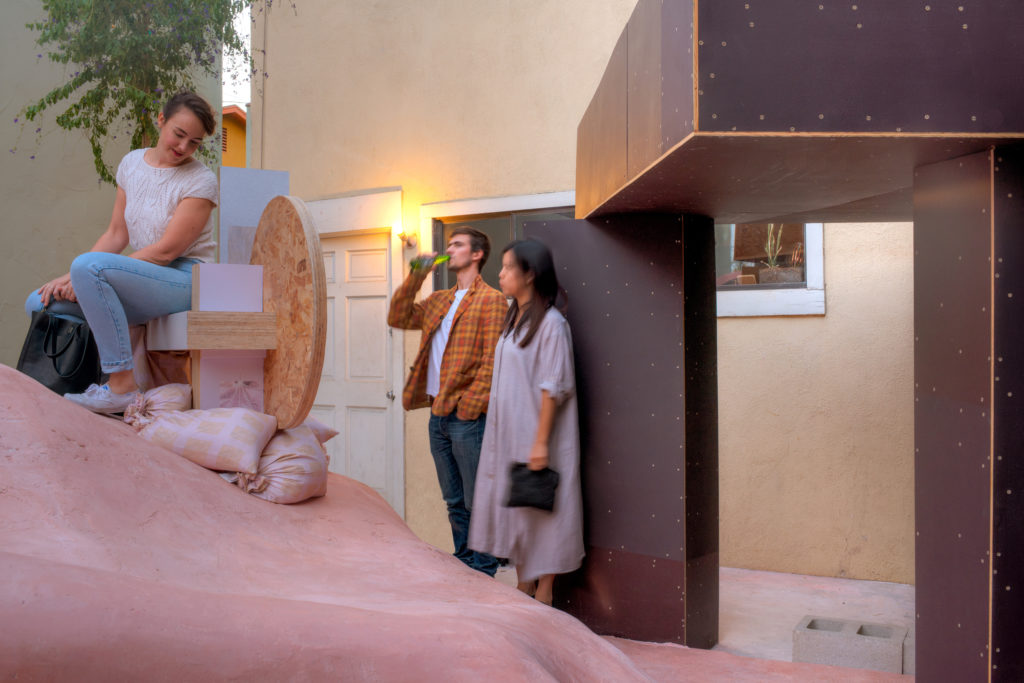 Our clumps fill the Materials and Applications courtyard almost completely. There is no obvious vantage point from which to make a picture. The front elevation is really more of a rear or a peek into the infrastructural supports of the project, and nowhere inside the courtyard is there a vantage point from which the whole thing can be ascertained. Maps or aerial photographs provide the best total visual description, although perhaps these are not properly ways of making a picture. The whole thing is filled with affordances for activity, but there are not nameable programs disposed in the amalgamation of nameable things, only “almost” or “proto-programs” arrayed along a circuit. At the entry there is a choice of entry through a seven-foot diameter steel culvert or a small gap that leads to an apparently underground chamber. The culvert passes underneath a large color-colored plaster blanket and deposits visitors in a small clearing, open to the sky, surrounded by bamboo on one side and the coral blankets on the other, which now appear to be a large fabric-y mound with folds and creases. The hill can be climbed. There are places to rest on flat spots and folds. The side of a masonry ziggurat works like bleachers. A fold at the back of the mound lifts up high enough to reveal the entrance to a passage. It into the mound along a straight axis terminating in a chamber, that, although it is at the utmost point of depth underneath the mound is also a kind of outside again, sandwiched between ziggurats that may contain additional chambers. To the left, a gap, and beyond it, again the sidewalk.