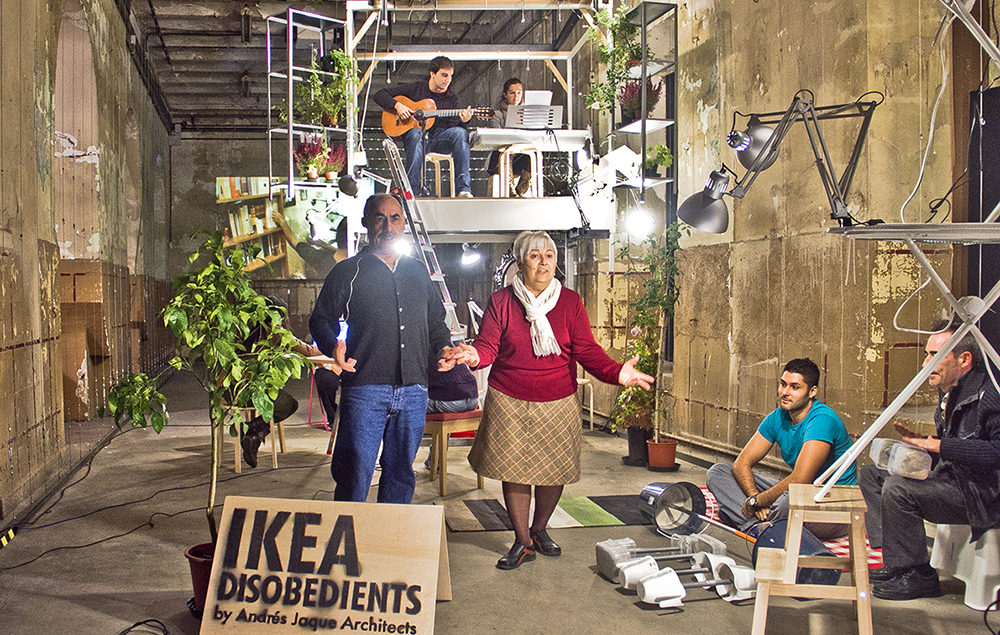 IKEA Disobedients is a response to the world’s most important architectural actor, IKEA, and its promotion of homes as “independent republics” made of comfort and familiarity. Comprising alternative pop-up showrooms around the world, online-distributed movies, and the hacking of IKEA products; IKEA Disobedients reappropriates IKEA’s transmedia strategy to empower alternative domesticities, where otherness and engagement are encountered.

Launched in 2011, the work helped stop cases of eviction in Madrid, during the post-2008 financial crisis.

IKEA delivers societies. IKEA is a purveyor of social structuration. 98% of the people depicted in the IKEA catalogue are young. 92% of them are blond. They are either children, or busy having children. Everything IKEA manufactures is aimed at turning the sphere of domesticity into a sunny, happy, apolitical space inhabited by contented, healthy, young people. The independent Republic of Our Home. The sense of a home or a household’s life, however, may also be constructed from day to day in quite different fashions. Not all of us are healthy. Not all of us are young. Not all of us are into having children.

A different way of constructing ordinary life may, however, be conceived. Disobeying IKEA’s injunction to contain social interactions within sunny apolitical home-enclaves is what we propose as an urban counter notion of the domestic: not a neutral space, but one installing controversy and disagreement precisely at the site where affections may also emerge. 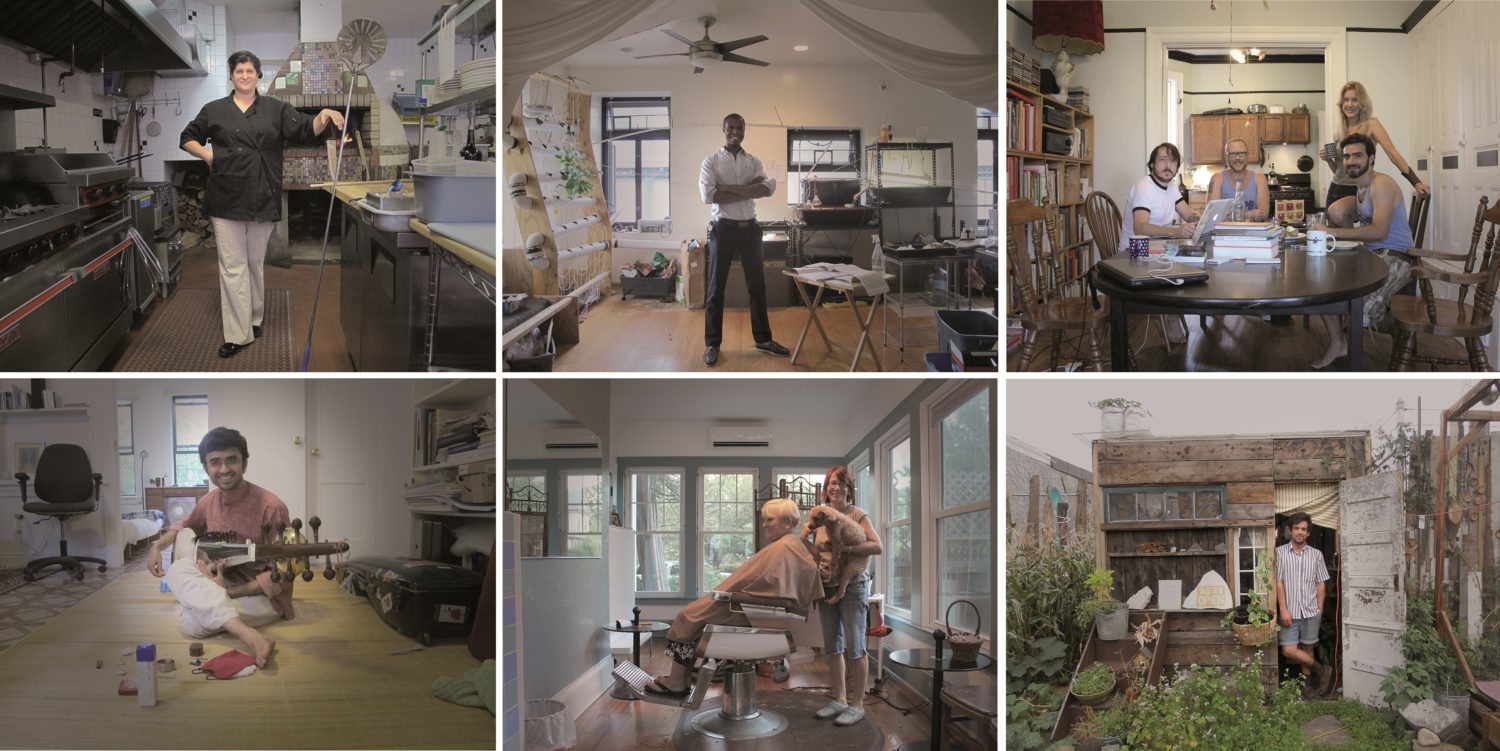 For the last two years Aurora has been living in Ethiopia, Cambodia, and Turkey, working as a volunteer in cooperation projects. She now lives with her girlfriend in Madrid, where they share a downtown apartment with four more people. During all this time, she has never lived in the sort of environment that might fit conventional descriptions of familial space, and yet she’s been part of different forms of domesticity shaped by the flows of affection and reciprocity between people not joined by a common past.

Daniel lives in an apartment next to Puerta del Sol in central Madrid. He spends an hour at the gym every day. A number of websites provide him with access to friendship, affection, and sex. His home-space is not his flat, but a spatial constellation constituted by his apartment, the gym, and a tangle of online-managed relationships. His home is not an independent republic of disconnection and comfort. It is precisely in the way domesticity is based on connection where he encounters conflict and misunderstanding, but also the possibility for self-construction, activism and support.

Candela lives with her three daughters, her grandchildren, and six dogs, in an old apartment in the Lavapiés district in Madrid. A number of elderly male neighbors living on their own regularly have dinner at Candela’s place. Social networks based on solidarity flourish at such gatherings.

Manolo lives with his wife in an apartment in Vallecas. He works as the editor of an independent magazine whose publishing costs are defrayed by an association devoted to supporting different forms of activism. From his studio-like work-space at home, Manolo edits the publication’s political contents. His home is not an “independent republic,” but the site granting him access to public debate and participation.

On average, Carlos and Marina devote more than eight hours a day to playing music, both at home and at the music school where they study. For them, playing is both an intensely personal experience, and a dimension of collective bonding—both an expression of individual sensitivity, and a form of connection with wider networks of people sharing a similar passion for music. Playing music is, therefore, the activity on which the articulation of both their private and their social lives hinges. For them there is no divorce between the domestic and the public, as both domains are interwoven within the same activity in their daily lives.

Nayana came to Spain looking for a job and for educational opportunities. Her getting married was not meant as an expression of the love and commitment shared with her partner, but was intended rather as a means to obtain a legal status facilitating her professional projects. Her domestic life was therefore shaped by the way interpersonal relationships are officially construed.

Toñi lives on her own in an apartment in Vallecas. Together with Manolo and other locals, she is a member of a chirigota—an amateur group which sings satirical songs. They call themselves “Los de siempre y uno más” (“The usual ones plus one more”). With her fellow chirigota members she plans trips and dinner parties—and it’s with the chirigota that she celebrates her birthdays. Though the members of the chirigota are not related, it is when they are together that they say they “feel at home.”

Paco lives with a friend in Las Tablas. He has no children, and never intended to start a family. On weekends he spends time together with his buddies playing the guitar in a public park.

Berta (in the picture, now Teo) lives in a squat with a community of lesbian and trasgender persons. Occupying the property afforded them an opportunity to develop a project based on principles of communal economy and self-management. Taking care of material needs is not the only issue they see as a common concern to be managed collectively: contributing to the emotional and professional empowerment of each member of the community is also seen as everyone’s responsibility.

Greg Newton and Donnie Jochum, and Maja Leonardsen Musum and Corentine Bohl, form a two-loving couples home. Greg and Donnie collect books as part of the plan to open, in the future, a LGBT-oriented bookshop. Their kitchen is a place where they get to interact and share some intimacy with non-family relatives. It is also the place where they emerge as citizens committed to a position on public concerns and open controversies. Their home is an arena, from which contributions to the commons are produced.

Denish Kinariwala occupies, during his summer holidays, an apartment lent to him by a friend. The rest of the year he lives in International House, a student residence. His home is not a place, but the possibility of making decisions on what he wants his life to be like in each moment. When asked, “Where do you feel at home?”, he answered, “Playing sarod in the park.” The redundancy of the city provides him with the possibility of moving from one place to another. The inefficient availability of possibilities is where he finds the comfort he pursues. Home for him is not a well-designed fixed enclosure with views on the outer urban, but the feeling of being provided with a resiliency of available options.

Frank Traynor brought an old wooden shack from upstate and set up camp in one of the rare gardens, belonging to two designer girlfriends, squashed between existing buildings in Brooklyn. The designers are happy about the way he keeps the garden beautiful and makes it a lively place by entertaining all sorts of easygoing acquaintances. The attractive garden draws passersby into his shop where he sells all sorts of things that he collects. He pays no rent in money, but instead delivers contributions to improving others’ daily lives. Comfort does not come out of familiarity, but from the possibilities of association, resulting from the encounter of difference.

Moddy Harding lives with her husband in a Long Island suburban home. She transformed the TV room into an informal hair-dressing shop, where she cuts and combs a number of locals’ hair. The house acts as a space which is both homely and publicly available. The center of the communal life in the neighborhood is not the squares or the streets but bubbles like Moddy’s shop, something that is reflected in the suburbs, where people go inside to find unfamiliar others.

Mama Gianna remembers being raised in the kitchen of Manducatis, the restaurant her parents still own on Jackson Avenue. She now runs Manducatis Rustica, less than six minutes from there. Her children spend most of their time in the restaurant playing and surfing the net on the computer she installed next to the kitchen, as well as talking to clients and staff after school. They refer to the restaurant as home, due to the amount of time they spend there. Her apartment, her parents’ apartment, and the two restaurants compose a fragmented domesticity inserted within two city blocks. In their life there is no easy distinction between the intimate and the communal. Their domesticity is not an “independent republic” but an urbanism constructed out of fragmented spaces that become connected by the way they are performed in every day.

Rael Michael Clark rents an apartment in Queens and it is the place where he carries out his extensive research and invention work on aquaponics: a self-regulated system to produce food in which hydroponics are combined with the way fish are raised in aquacultures. He can afford the cost of these experiments by letting others use the lab space for celebrations. His apartment is not the place where reality renders itself familiar, but the very location where Rael encounters the uncertain and, in a minor scale, contributes to reinvent human relationship with nature.